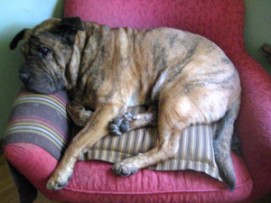 Not every dog rescue is a fairy tale like Heidi’s story, from Texas storm drain to Hollywood. Meet Bruno, the rescue dog from hell.

Actually, Bruno is not from hell—he’s from Woodland Hills. At least, that’s where our friends Deborah and Ron Kaye found him in 2005, lurking in the bushes in front of their house. Deborah admits to being scared of the stocky creature, a pit bull-Shar-pei mix whose stripy velvet coat was marred with mange and whose lopsided grin was studded with teeth as crooked and broken as an old graveyard. Read the Rest of this Story »

Back to Business and Emerson College LA

I never left Los Angeles Business Journal, but as of January I'm back full-time and full-steam covering entertainment/media, philanthropy and continuing to handle our popular weekly Style pages. I'm also having fun with a bright class of 6 students at Emerson College LA in Hollywood as member of the adjunct journalism faculty On the side, I have had a great time turning my 2014 novel Dark Lady of Hollywood into a stage play, stay tuned!