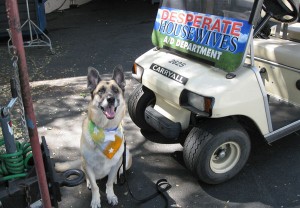 On a recent Monday, the dog and I got the call we’d been waiting for: We were to report to Universal Studios on Wednesday afternoon as nonunion background actors to portray “Neighbor with Dog” on an upcoming episode of “Desperate Housewives.” “Background actor” is just a fancy way of saying “extra.”

I have no show biz aspirations, but since you can’t send a German shepherd to a major studio by herself, I am resigned to doing what I must for the dog. I’m not an actor; I’ll just play one on TV. We eagerly agreed. Read the Rest of this Story »