Even a short stay in Dublin is like walking into literary history, accompanied by music

Two things I resolved before arriving in Dublin: I would never eat blood sausage, and I would not leave town without having my first pint o’ Guinness stout in its city of origin.

One half of the pledge came true on our first night: Here I was at the Cobblestone, a self-described “drinking pub with a music problem,” listening to live traditional music with my first pint in front of me on the bar.

But I failed to hide my horror after my first sip of the foamy, room-temperature stout. The female bartender asked whether I’d like to try it again with a shot of black currant syrup. “It makes it easier for the ladies,” she said sotto voce as she “spiked” my forbidding dark brown drink.

Although I appreciated the sisterly gesture, the syrup didn’t make Guinness any easier for this lady. It was still nasty, just sweeter. I began to wonder if I had been too hasty in writing off the blood sausage.

Guinness was the only bad taste in my mouth after our three-night, two-day speed tour of Ireland’s capital city. My husband, Alan, and I learned that you can fall in love with Dublin even if you don’t have much time.

We were on the way home from five glorious days in Italy’s Umbrian countryside when we decided on a whim to extend the trip with two days in Dublin. I consulted my favorite free travel agent — that is, Facebook. Anybody been to Dublin, and how should we make the most of a short stay? Posting an appealing image of the Lucky Charms leprechaun was way more fun than any cat video.

The post led us to our virtual tour guide: Paul Gregg, an American artist working in Dublin. Family demands (that is, his 1-year-old son Paolo) prevented us from meeting during our stay. Still, thanks to email he was kind enough to steer us away from tourist traps while making sure we didn’t miss important highlights.

On Gregg’s short list: the Book of Kells at Trinity College — glorious illustrated manuscripts created by Irish monks circa 800 — and the Old Library’s Long Room (“It’s like seeing the Liberty Bell in Philadelphia or the Crown Jewels in London,” he said). He also recommended the National Museum of Ireland (home to ancient “bog bodies,” human remains mummified by the acidic conditions of peat bogs), and drew our attention to the city’s smaller museums devoted to subjects as diverse as postage stamps and leprechauns, whiskey and James Joyce.

We sought Gregg’s advice on two other important matters: music pubs and fish and chips. He recommended the Cobblestone’s authentic free music sessions over the more touristy O’Donoghue’s or Temple Bar pubs and steered us from fish and chips haunt Leo Burdock (“too greasy”) to the “more civilized” Beshoff Bros., where we enjoyed fluffy fried haddock in a casual diner atmosphere.

We knew we wouldn’t have time for everything, but Dublin’s hop-on, hop-off buses made it easy to cover a lot of ground quickly and inexpensively.

Our hotel, the O’Callaghan Davenport, is conveniently close to the Merrion Square tour bus stop. Although more functional than elegant, the hotel is ideally located, and the price includes a full Irish breakfast buffet (crazy-good scones and oatmeal; still not brave enough for blood sausage).

By chance, we landed during the annual Dublin Theatre Festival, so our only real planning was to buy tickets online to Conor McPherson’s “The Night Alive” at the historic Gaiety Theatre as soon as we arrived at our hotel. Beyond that, we left our fate in the hands of Gregg, the hop-on, hop-off buses and the serendipity that brought us to Dublin during an almost-unheard-of run of rain-free late September days.

We bought two-day Gray Line sightseeing bus tickets from the hotel concierge and were off. We could walk to Trinity College and the Book of Kells, and the bus got us to a tour of the Old Jameson Distillery (we figured everyone else would choose the Guinness Storehouse), Beshoff’s and the bustling Temple Bar and Grafton Street shopping areas.

Here’s what Dublin, Ireland, visitors can see of the Easter Rising during the rebellion’s centennial
Apr 11, 2016 | 7:30 AM

It also took us to the charming Little Museum of Dublin. The museum, in an 18th century Georgian townhouse, chronicles the city’s 20th century history. It’s accurately described as a “people’s museum”: Most of its collection is donated by locals. Music fans created the exhibition “U2: Made in Dublin,” chronicling 40 years in the history of the rebellious rock band. Half-attic, half-formal exhibition, the Little Museum bristles with nonconformist energy.

But we agreed that the highlight of our visit was a literary walking tour by one Gerry McDonald. Various walking tours are included in the price of the bus ticket, and as an English major with a particular fondness for James Joyce, W.B. Yeats and Oscar Wilde, I chose this one over pubs.

Because no one else showed up, we had McDonald to ourselves. This seemingly tireless and knowledgeable guide gave us the social history of Trinity College, dropped in on Davy Byrnes pub (a Joyce hangout) and pointed out Yeats’ birthplace in a row of swank town houses.

He told us that although outsiders call the land’s traditional language Irish Gaelic, most locals call it “speaking Irish.”

Standing in Merrion Square Park — one of Dublin’s five Georgian squares — is a 1997 sculpture of Wilde (1854-1900), jailed for “indecency” with other men. The sculpture features Wilde reclining rakishly on a 35-ton white quartz boulder. McDonald pointed out something it’s easy to miss: One side of his face is grinning. On the other side, the mouth is downturned.

Even in stone, Wilde continues to lead two separate lives.

McDonald ended our tour at Sweny’s pharmacy, which figures in Joyce’s “Ulysses” and now is a Joyce bookstore and memorabilia shrine. I got to talking books with a volunteer at Sweny’s — like a character out of “Mary Poppins,” with a bright red flower in her bonnet — and she invited me to leave a copy of my 2014 novel “Dark Lady of Hollywood” to put on a top shelf alongside those of other visiting authors.

Imagine being invited to put my L.A.-centric paperback in proximity to rare early editions of Joyce classics. And I just happened to have a copy in my hotel room right across the street.

Call it the luck of the Angeleno.

Weekly
From weekend getaways to vacation deals, get all your need-to-know travel news from L.A. Times editors.

The off side of Berlin 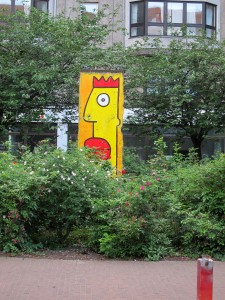 My husband, Alan, and I were on our way from L.A. to Budapest, Hungary — our first trip to Eastern Europe. We had to change planes somewhere, and that somewhere happened to be Berlin, a frequent hub for travel to Northern and Eastern European destinations.

We had heard that Berlin was an up-and-coming artists’ community, often compared with L.A. Instead of sentencing ourselves to a long layover at the airport, we decided to spend a long weekend in Berlin.

We expected three days of prowling contemporary art galleries mixed with sobering visits to historical sites (the Brandenburg Gate, the Memorial to the Murdered Jews of Europe, a glimpse of where the Berlin Wall once stood). Maybe a little beer, bratwurst and strudel thrown in for good measure. Read the Rest of this Story » 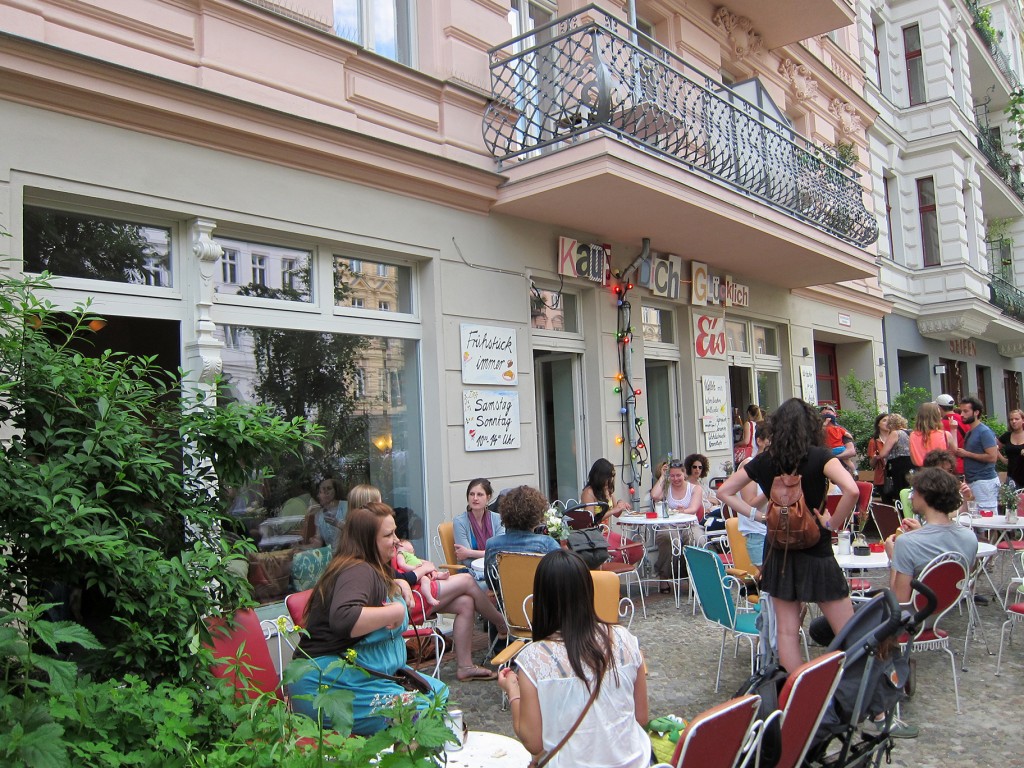 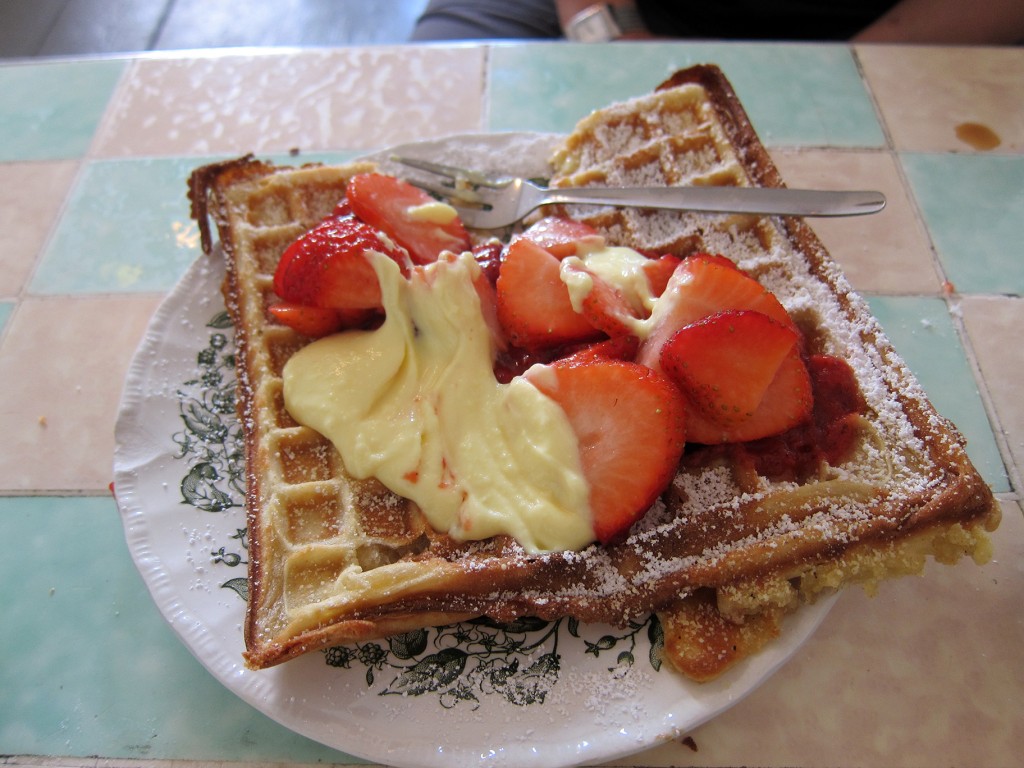 Waffle with Custard and Strawberries

Mushrooms and murals put Hungarian Gypsies on the map 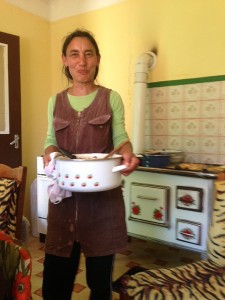 BODVALENKE, Hungary — I’m not sure what I expected to bring back from an eight-day luxury tour of Budapest, Hungary, and environs. Memories, photos of Art Nouveau architecture, a few extra pastry-induced pounds and a lifetime supply of sweet paprika, maybe.

I never thought I’d find myself, just a month later, Skyping at 7 a.m. about a storm that had recently hit the village of Bodvalenke, about 150 miles northeast of Budapest, not far from the Slovakian border. Hailstones the size of walnuts had caused flooding and decimated the natural vegetation and local crops, one of the village’s few sources of income. Read the Rest of this Story » 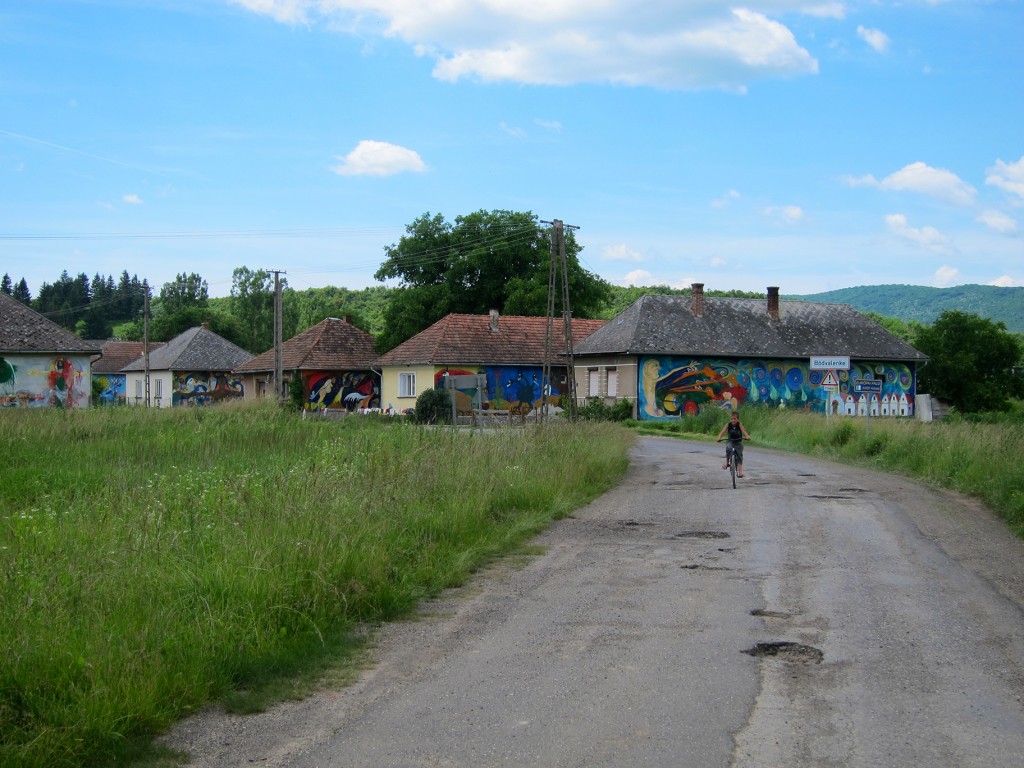 At Tanzania’s Mahale Mountains park,
`chimpers’ get to know the local clan on a first-name basis. 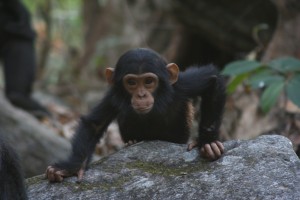 Mahale, Tanzania — At age 16, Orion is a handsome chimpanzee, a primate hottie. Despite his status as a creature of the wild, his glossy black coat looks as if it were combed and fluffed by a personal groomer. It gleams in morning sunlight filtering through towering forest trees. Read the Rest of this Story »